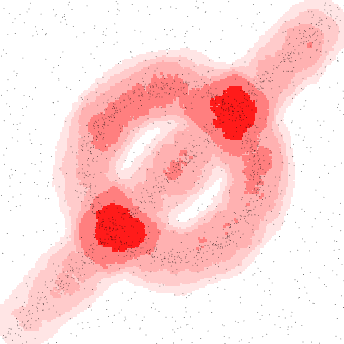 We show that geometric inference of a point cloud can be calculated by examining its kernel density estimate with a Gaussian kernel. This allows one to consider kernel density estimates, which are robust to spatial noise, subsampling, and approximate computation in comparison to raw point sets. This is achieved by examining the sublevel sets of the kernel distance, which isomorphically map to superlevel sets of the kernel density estimate. We prove new properties about the kernel distance, demonstrating stability results and allowing it to inherit reconstruction results from recent advances in distance-based topological reconstruction. Moreover, we provide an algorithm to estimate its topology using weighted Vietoris-Rips complexes. 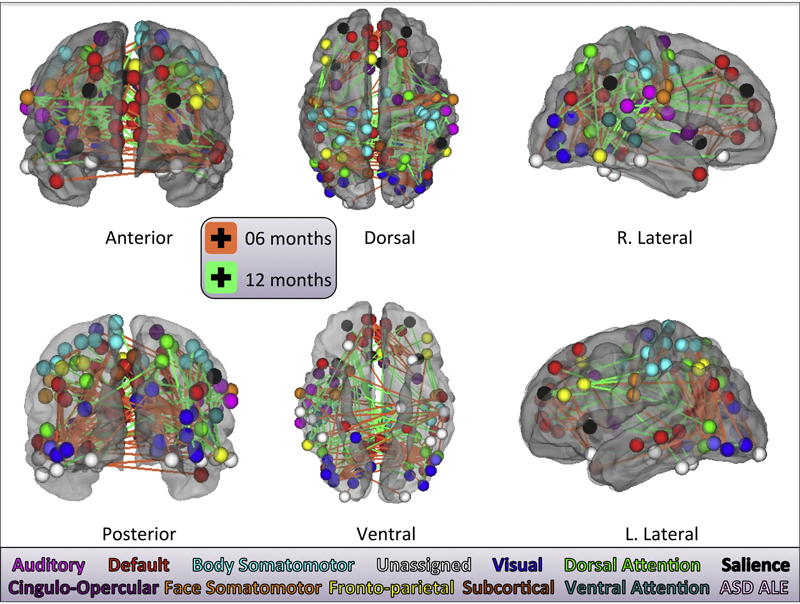 Human large-scale functional brain networks are hypothesized to undergo significant changes over development. Little is known about these functional architectural changes, particularly during the second half of the first year of life. We used multivariate pattern classification of resting-state functional connectivity magnetic resonance imaging (fcMRI) data obtained in an on-going, multi-site, longitudinal study of brain and behavioral development to explore whether fcMRI data contained information sufficient to classify infant age. Analyses carefully account for the effects of fcMRI motion artifact. Support vector machines (SVMs) classified 6 versus 12 month-old infants (128 datasets) above chance based on fcMRI data alone. Results demonstrate significant changes in measures of brain functional organization that coincide with a special period of dramatic change in infant motor, cognitive, and social development. Explorations of the most different correlations used for SVM lead to two different interpretations about functional connections that support 6 versus 12-month age categorization. 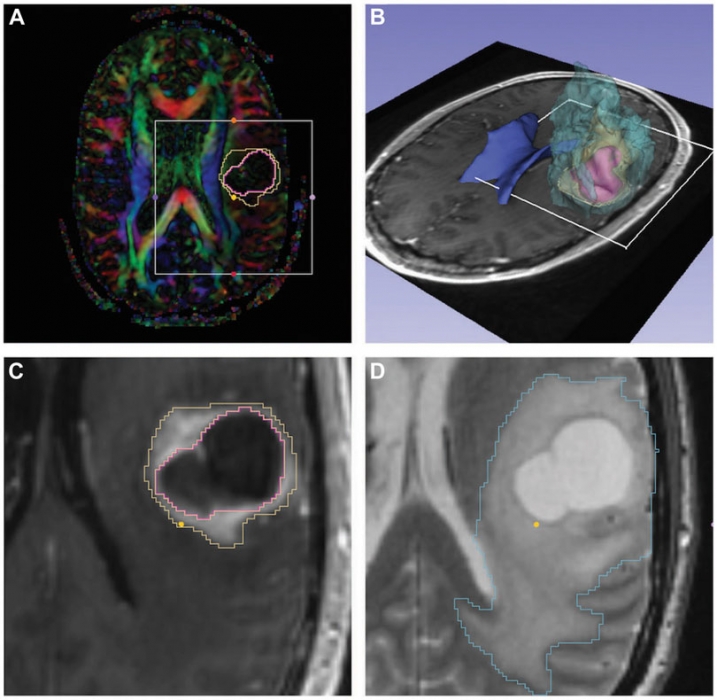 BACKGROUND AND PURPOSE
Diffusion tensor imaging (DTI) tractography reconstruction of white matter pathways can help guide brain tumor resection. However, DTI tracts are complex mathematical objects and the validity of tractography-derived information in clinical settings has yet to be fully established. To address this issue, we initiated the DTI Challenge, an international working group of clinicians and scientists whose goal was to provide standardized evaluation of tractography methods for neurosurgery. The purpose of this empirical study was to evaluate different tractography techniques in the first DTI Challenge workshop.

METHODS
Eight international teams from leading institutions reconstructed the pyramidal tract in four neurosurgical cases presenting with a glioma near the motor cortex. Tractography methods included deterministic, probabilistic, filtered, and global approaches. Standardized evaluation of the tracts consisted in the qualitative review of the pyramidal pathways by a panel of neurosurgeons and DTI experts and the quantitative evaluation of the degree of agreement among methods.

RESULTS
The evaluation of tractography reconstructions showed a great interalgorithm variability. Although most methods found projections of the pyramidal tract from the medial portion of the motor strip, only a few algorithms could trace the lateral projections from the hand, face, and tongue area. In addition, the structure of disagreement among methods was similar across hemispheres despite the anatomical distortions caused by pathological tissues.

The visualization of variability in 3D shapes or surfaces, which is a type of ensemble uncertainty visualization for volume data, provides a means of understanding the underlying distribution for a collection or ensemble of surfaces. While ensemble visualization for surfaces is already described in the literature, we conduct an expert-based evaluation in a particular medical imaging application: the construction of atlases or templates from a population of images. In this work, we extend contour boxplots to 3D, allowing us to evaluate it against an enumeration-style visualization of the ensemble members and also other conventional visualizations used by atlas builders, namely examining the atlas image and the corresponding images/data provided as part of the construction process. We present feedback from domain experts on the efficacy of contour boxplots compared to other modalities when used as part of the atlas construction and analysis stages of their work.

A novel implicit parametric shape model is proposed for segmentation and analysis of medical images. Functions representing the shape of an object can be approximated as a union of N polytopes. Each polytope is obtained by the intersection of M half-spaces. The shape function can be approximated as a disjunction of conjunctions, using the disjunctive normal form. The shape model is initialized using seed points defined by the user. We define a cost function based on the Chan-Vese energy functional. The model is differentiable, hence, gradient based optimization algorithms are used to find the model parameters. 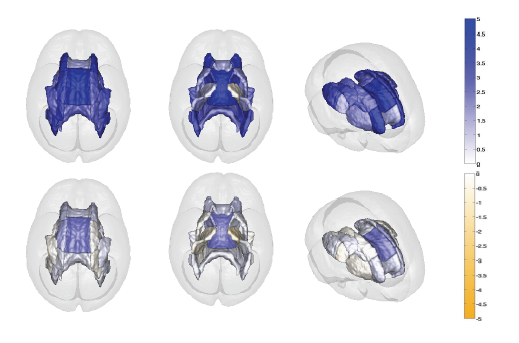 Early brain development is characterized by rapid organization and structuring. Magnetic resonance–diffusion tensor imaging (MR-DTI) provides the possibility of capturing these changes noninvasively by following individuals longitudinally to better understand departures from normal brain development in subjects at risk for mental illness. This article illustrates the modeling of neurodevelopmental trajectories using a recently developed framework. Descriptions include the estimation of normative models for healthy singletons and twins and a statistical framework to predict development at 2 years of age only based on neonatal image data – a capability with excellent potential for preclinical diagnosis and eventual early therapeutic intervention.

We introduce a novel general regression model that is based on a linear combination of a new set of non-local basis functions that forms an effective feature space. We propose a training algorithm that learns all the model parameters simultaneously and offer an initialization scheme for parameters of the basis functions. We show through several experiments that the proposed method offers better coverage for high-dimensional space compared to local Gaussian basis functions and provides competitive performance in comparison to other state-of-the-art regression methods. 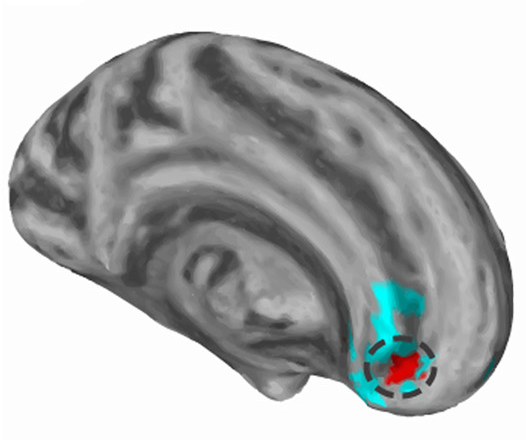 Prenatal drug exposure, particularly prenatal cocaine exposure (PCE), incurs great public and scientific interest because of its associated neurodevelopmental consequences. However, the neural underpinnings of PCE remain essentially uncharted, and existing studies in school-aged children and adolescents are confounded greatly by postnatal environmental factors. In this study, leveraging a large neonate sample (N = 152) and non-invasive resting-state functional magnetic resonance imaging, we compared human infants with PCE comorbid with other drugs (such as nicotine, alcohol, marijuana, and antidepressant) with infants with similar non-cocaine poly drug exposure and drug-free controls. We aimed to characterize the neural correlates of PCE based on functional connectivity measurements of the amygdala and insula at the earliest stage of development. Our results revealed common drug exposure-related connectivity disruptions within the amygdala–frontal, insula–frontal, and insula–sensorimotor circuits. Moreover, a cocaine-specific effect was detected within a subregion of the amygdala–frontal network. This pathway is thought to play an important role in arousal regulation, which has been shown to be irregular in PCE infants and adolescents. These novel results provide the earliest human-based functional delineations of the neural-developmental consequences of prenatal drug exposure and thus open a new window for the advancement of effective strategies aimed at early risk identification and intervention.

We develop a novel supervised learning/classification method, called disjunctive normal random forest (DNRF). A DNRF is an ensemble of randomly trained disjunctive normal decision trees (DNDT). To construct a DNDT, we formulate each decision tree in the random forest as a disjunction of rules, which are conjunctions of Boolean functions. We then approximate this disjunction of conjunctions with a differentiable function and approach the learning process as a risk minimization problem that incorporates the classification error into a single global objective function. The minimization problem is solved using gradient descent. DNRFs are able to learn complex decision boundaries and achieve low generalization error. We present experimental results demonstrating the improved performance of DNDTs and DNRFs over conventional decision trees and random forests. We also show the superior performance of DNRFs over state-of-the-art classification methods on benchmark datasets.

The local field potential (LFP) is of growing importance in neurophysiology as a metric of network activity and as a readout signal for use in brain-machine interfaces. However, there are uncertainties regarding the kind and visual field extent of information carried by LFP signals, as well as the specific features of the LFP signal conveying such information, especially under naturalistic conditions. To address these questions, we recorded LFP responses to natural images in V1 of awake and anesthetized macaques using Utah multielectrode arrays. First, we have shown that it is possible to identify presented natural images from the LFP responses they evoke using trained Gabor wavelet (GW) models. Because GW models were devised to explain the spiking responses of V1 cells, this finding suggests that local spiking activity and LFPs (thought to reflect primarily local synaptic activity) carry similar visual information. Second, models trained on scalar metrics, such as the evoked LFP response range, provide robust image identification, supporting the informative nature of even simple LFP features. Third, image identification is robust only for the first 300 ms following image presentation, and image information is not restricted to any of the spectral bands. This suggests that the short-latency broadband LFP response carries most information during natural scene viewing. Finally, best image identification was achieved by GW models incorporating information at the scale of ∼0.5° in size and trained using four different orientations. This suggests that during natural image viewing, LFPs carry stimulus-specific information at spatial scales corresponding to few orientation columns in macaque V1. 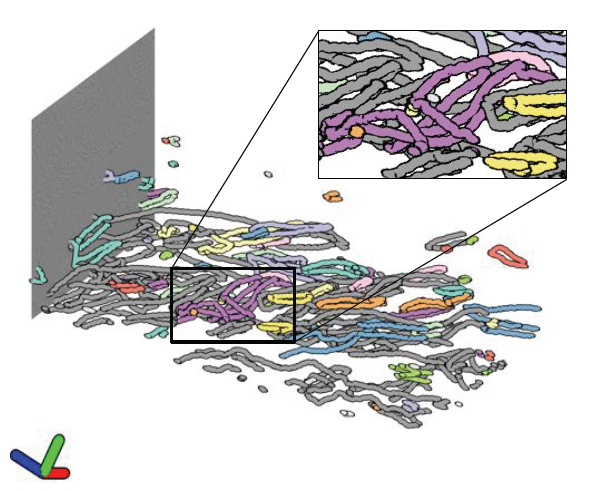 Vector field simplification aims to reduce the complexity of the flow by removing features in order of their relevance and importance, to reveal prominent behavior and obtain a compact representation for interpretation. Most existing simplification techniques based on the topological skeleton successively remove pairs of critical points connected by separatrices, using distance or area-based relevance measures. These methods rely on the stable extraction of the topological skeleton, which can be difficult due to instability in numerical integration, especially when processing highly rotational flows. In this paper, we propose a novel simplification scheme derived from the recently introduced topological notion of robustness which enables the pruning of sets of critical points according to a quantitative measure of their stability, that is, the minimum amount of vector field perturbation required to remove them. This leads to a hierarchical simplification scheme that encodes flow magnitude in its perturbation metric. Our novel simplification algorithm is based on degree theory and has minimal boundary restrictions. Finally, we provide an implementation under the piecewise-linear setting and apply it to both synthetic and real-world datasets. We show local and complete hierarchical simplifications for steady as well as unsteady vector fields.

Alternative splicing is a process by which the same DNA sequence is used to assemble different proteins, called protein isoforms. Alternative splicing works by selectively omitting some of the coding regions (exons) typically associated with a gene. Detection of alternative splicing is difficult and uses a combination of advanced data acquisition methods and statistical inference. Knowledge about the abundance of isoforms is important for understanding both normal processes and diseases and to eventually improve treatment through targeted therapies. The data, however, is complex and current visualizations for isoforms are neither perceptually efficient nor scalable. To remedy this, we developed Vials, a novel visual analysis tool that enables analysts to explore the various datasets that scientists use to make judgments about isoforms: the abundance of reads associated with the coding regions of the gene, evidence for junctions, i.e., edges connecting the coding regions, and predictions of isoform frequencies. Vials is scalable as it allows for the simultaneous analysis of many samples in multiple groups. Our tool thus enables experts to (a) identify patterns of isoform abundance in groups of samples and (b) evaluate the quality of the data. We demonstrate the value of our tool in case studies using publicly available datasets.