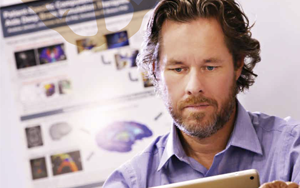 For many who suffer from debilitating neurological disorders such as Parkinson’s Disease, the constant muscular tremors are an unbearable symptom. Just drinking from a cup can be an overwhelming challenge.

When medication doesn’t work, brain surgery to destroy certain cells can be risky, and the results are irreversible. But there has been an emerging third option — deep brain stimulation (DBS), a therapy in which electrodes are implanted in the patient’s brain that deliver continuous electrical pulses to control motor function.

University of Utah bioengineering associate professor Christopher Butson has been researching ways to improve DBS systems to make them more effective and convenient for patients who wear them. He believes an answer lies in mobile tablets and smartphones.

Deep brain stimulation involves a procedure in which tiny electrodes on two metallic leads are implanted in the patient’s brain, one lead in each hemisphere. The leads are connected to a small battery-powered pulse generator (IPG) that’s also implanted in the chest. The IPG sends small milliamp pulses — an average of 130 per second — to the brain to suppress the patient’s trembling. According to Butson, as many as 150,000 people worldwide have DBS implants, and patients who use them also include those who suffer from essential tremor or Tourette Syndrome.

After a patient is implanted with a system, he or she has to return to the hospital as often as three to four times in the first six months and about once every six months afterwards to have the unit’s settings adjusted.

A member of the university’s Scientific Computing and Imaging Institute (SCI) and director of Neuromodulation Research, Butson and his team are developing mobile apps that allow physicians to view a 3D model of a patient’s brain based on MRI and CT images. They then can figure out which regions of the brain will react best to the impulses by testing the settings on the iPad app before changing them on the person’s DBS system.

“These DBS devices need to be programmed after surgery, and that can be a long process and much more complicated with new technology that’s coming out,” he said. “Before, doctors were doing advanced trial and error [on the patient].”

With the app “ImageVis3D Mobile” — which Butson co-developed with SCI colleague Jens Krüger — and a newer version called “Duality,” doctors will be able to make more accurate adjustments in a fraction of the time. “ImageVis3D Mobile” is now available for free on the iTunes App Store while “Duality” is still being developed.

One of the advantages of these applications is the patient can now have the DBS settings adjusted at a nearby clinic or by even a home healthcare worker instead of at a major hospital. “Duality” also allows the clinician to wirelessly connect with servers that can calculate better DBS settings for the patient in near real time.

“Right now, if you’re a patient who gets deep brain stimulation you pretty much have to travel to a major academic medical center for the rest of your life for treatment because that’s the only place that can manage these devices,” Butson said. “With the iPad, we have one study where we are going to give this to nurses who travel to patients’ homes.”

Butson, who received his doctorate in bioengineering from the University of Utah, said he plans to launch a company to distribute his new software, and has already successfully used
“Duality” with a patient in South Jordan, Utah.

“There are a lot of neurological conditions that have limited treatment options,” he said. “I felt that by providing better designed devices we could really improve patients’ lives.”

Article as it appears in the College of Engineering Alumni Research News.