The following third party software is required to build and run ElVis.

CMake is used to generated the project files required to build ElVis (Makefiles on Linux and OS X, Visual Studio solutions on Windows). ElVis requires version 2.8 or later, which can be obtained here (linux distributions often have cmake available through their package managers).

Once installed, the path to the binaries should be added to the PATH environment variable.

We use the Qt framework for ElVis' graphical user interface. ElVis can be used with a binary distribution or with a version built from source. Once Qt is installed, it is helpful, but not required, to set the QTDIR environment variable to the location at which Qt has been installed.  For example, if Qt has been installed in /usr/local/Trolltech/Qt-4.7, then the environment variable should be set to

QTDIR=/usr/local/Trolltech/Qt-4.7and to add QTDIR/bin to the PATH (and to the LD_LIBRARY_PATH on Linux).

In Windows, this involves opening the Environment Variables dialog from Control Panel -> System Properties -> Advanced tab, adding a new system variable QTDIR with the path of the Qt installation, and then appending the following to the end of the existing PATH variable: ;%QTDIR%\bin. A system restart will be necessary after making this change.

ElVis has been tested with Qt 4.7, which can be obtained here.

OptiX is the GPU-based ray-tracing engine that ElVis uses for all of its visualizations.  The installers can be found here.

ElVis requires OptiX 2.1.1 or later, although we have found that performance is better using 2.5 or later.

Note for OSX Users: Currently ElVis on OSX only supports OptiX 3.0. Earlier versions of OptiX can be found under the "Previous Releases" section on the OptiX download page here.

ElVis requires a minimum of CUDA 4.2.  The version of Cuda that is required is based on the version of OptiX that is used.  See the OptiX release notes to determine which Cuda version can be used. CUDA installers can be found here.

Note for OSX users: Currently ElVis on OSX only supports CUDA 5.0, which can be found on the CUDA Toolkit Archive page here.

ElVis has only been tested with out of source builds, so all instructions that follow assume that your chosen build directly is not in the ElVis source directory.

Run CMake as normal, choosing whatever build directory you like, and ELVis/src as the source directory. If you have used the default directories for CUDA, OptiX and Qt and the respecitive PATH variables are set you should not have to change any CMake settings. If CMake is unable to find any of the following variables, this is how they should be set.

ElVis provides several options to indicate which modules are built and features are available in the CMake configuration file.

This will create a series of visualizations and compare them with the expected image.

ElVis requires that the GPU used for the Cuda and OptiX kernels must be the same GPU connected to the display.  The first step is to determine what number has been assigned to your GPU by the OS.  Once that is determined, you then set the environment variable CUDA_VISIBLE_DEVICES=, where X is the number assigned to your GPU as determined below. 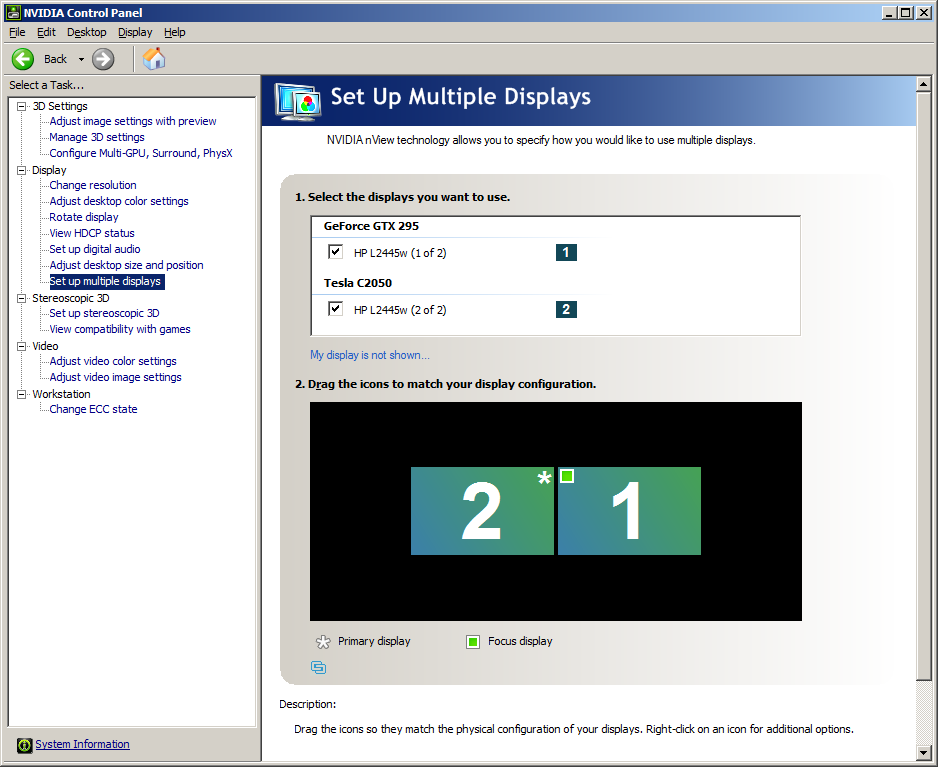 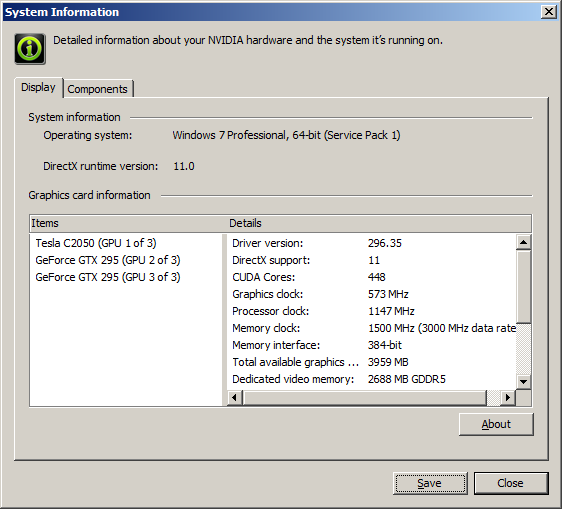 After starting ElVis, a screen similar to the following will be visible: 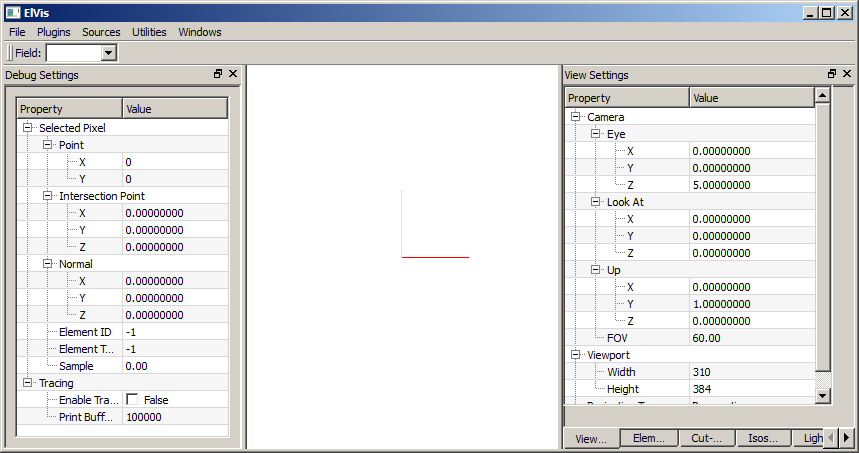 The first step is to load an extension.  This is done via the plugin menu.  Select Plugins->Load Plugin 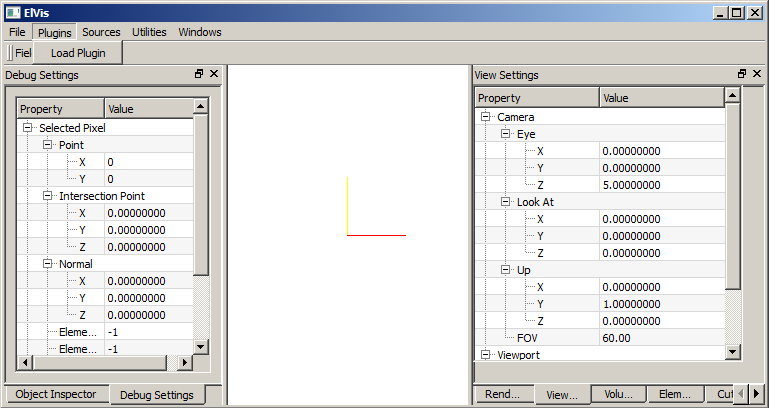 Extensions are implemented as shared libraries (.dll on Windows, .so on Linux).  To load an extension, select the shared libarary corresponding to the desired exension. 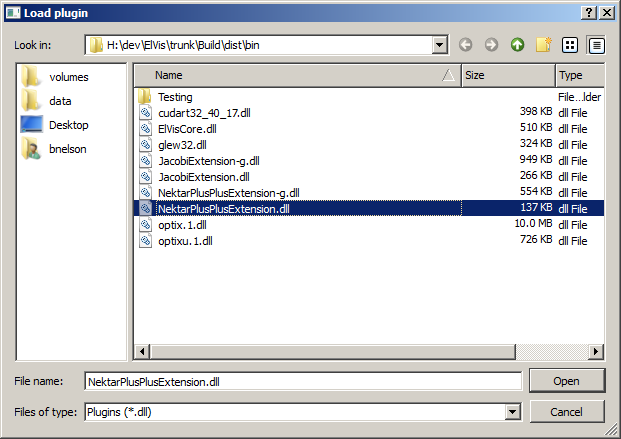 Once selected, extensions will be automatically loaded when ElVis starts in the future.

For this example, we'll be using the Jacobi extension, which is a sample implementation of a runtime extension that ships with ElVis.

Load the file bulletH1P3.dat, located in the volumes directory of the ElVis distribution.  After loading the model, a bounding box representing the spatial extent of the volume is shown in the visualization window. 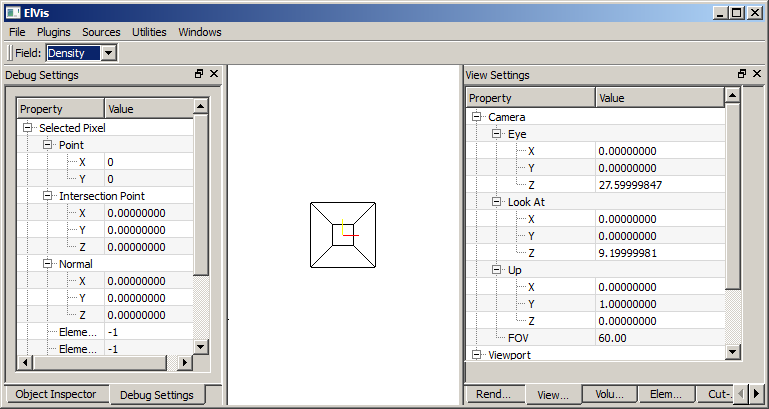 Manipulating the view can be accomplished with the mouse as follows:


To create a cut-plane, select the Sources menu then click "Create Cut Plane".  This creates a cut plane that cuts through the center of the dataset. 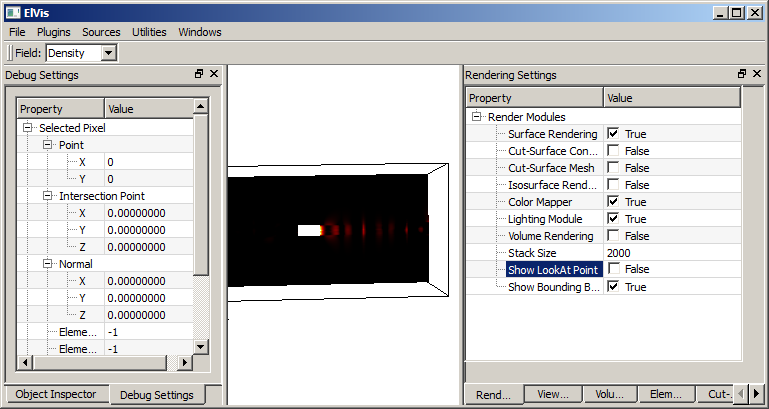 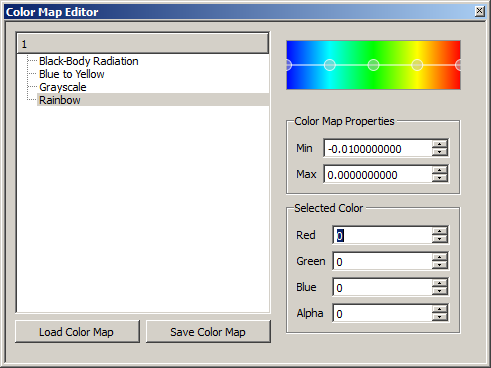 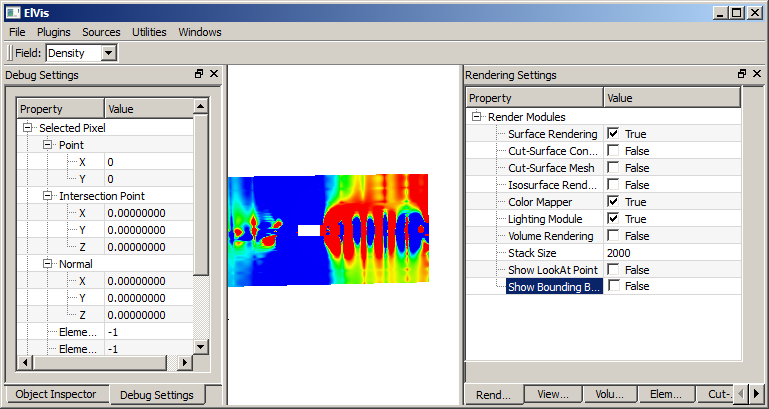 ElVis can be extended with two different types of extensions.  In the following sections, we describe each type of extension and discuss their pros and cons.

A conversion extension is used to convert a finite element volume to the Nektar++ format used internally by ElVis.  This type of extension is most appropriate for volumes that have the following properties:

If the volume contains elements of different types than those listed above, a conversion exetension may still be created, but the elements must be converted into one of the four element types indicated above.  If the field is not represented by a polynomial, then the converted volume will contain error.  In this case, we recommend that a runtime extension be used.

Runtime extensions give ElVis the ability to access a simulation's native data, rather than first converting it to the Nektar++ format.  It does this through a collection of high-level OptiX and Cuda functions that must be implemented in your extension.

Runtime extensions are implemented as shared libraries that are loaded by ElVis at runtime.  Each runtime extension consists of three components, described in further detail below.

The OptiX and Cuda interfaces are both written in Cuda.  Cuda does not support linking of pre-compiled object files, so ElVis uses a different methods to provide customized behavior for each extension.

In this section, we will create a fully-functional runtime extension to illustrate the necessary steps and code.  This section, we assume that there is an ElVis source distribution.  We will refer to the location of the source distribution with the variable $ELVIS.  Therefore, the source files are located at $ELVIS/src, the build is at $ELVIS/Build, and the ElVis distribution is at $ELVIS/build/dist. To simplilfy the initial extension development steps, we have included a runtime extension template at $ELVIS/src/ElVis/Extensions/RuntimeExtensionTemplate.  This template will enable the creation of a simple runtime extension that can be loaded into ElVis (although it will have no functionality).  The code that is located in this directory is not able to be compiled directly; rather, CMake must first be used to generate the runtime extension code, customized with your extension's name.

Run CMake on the template to generate the extension source code

The C++ interface is responsible for loading high-order data from disk and tranferring it to the GPU for visualization.  It is also responsible for handling user interaction and populating the ElVis gui.  This is primarily accomplished through concrete subclasses of ElVis::Model.  Each extension is required to have a model-specific version of this class available.

When an extension is initially loaded, ElVis looks for the following three methods, which must exist at the global namespace, have C linkage, and be visible outside the shared library.  On Linux/OS X, these methods will be visible by default.  On Windows, however, they are not, and must be explicitly exported (see ElVis/Extensions/JacobiExtension/Declspec.h for an example).  These methods provide the initial interface to the extension.

Each plugin must provide a name that is used in the ElVis gui to differentiate it from the other loaded plugins.  There are no restrictions on the name.

Returns a file name filter for use by the Qt QFileDialog class to open volume.  The format of the string is " (*.)".  For example, "Jacobi Volumes (*.dat)".

Loads the model from the given location and returns a pointer to a new Model object representing it.  ElVis will take control of this pointer and handle cleanup.

The runtime extension template provides default implementations of LoadModel and GetPluginName that are unlikely to need modification.  The implementation of GetVolumeFileFilter, however, will need to be modified to correspond to the extension used by the model.

The sample extension uses files with ".exd" extensions, so we update the method as follows:

The file format we will use is a binary format with the following structure:

In this example, there is a single scalar field associated with the volume. This example uses a modal basis. This is not a restriction imposed by ElVis and is simply the example used. Volumes using a nodal basis can be used as well.
Loading a volume from disk is performd in the LoadModel method. The default behavior of this method is to call the SampleRuntimeExtensionModel constructor that takes a single parameter (the location of the volume on disk). So the first step is to populate this constructor with the appropriate code to perform this task.

Create the model constructor to read the model.

Several of the Model class' virtual functions are reporting functions that inform ElVis about the model.

This method reports how many different scalar fields are associated with the model. For our sample implementation, there is only a single scalar field.

This method is responsible for returning information about a scalar field. When ElVis starts, it first queries the volume for the number of fields (using DoGetNumFields above), then calls this method, once per field, to obtain information about the field. The following fields of the FieldInfo result must be populated: The FieldInfo::Shortcut field is not currently used. When ElVis is updated to use this field, it will expect the shortcut string to be formatted according to the QKeySequence documentation.
Implement DoGetNumberOfElements

This method returns the number of elements in the volume. This method is only used for informational purposes in the ElVis GUI.

This method returns the corner of an axis-aligned bounding box for the volume. This bounding box is used to display the extent of the volume in the ElVis gui, as well as to accelerate ray-casting by quickly discarding rays that miss the volume entirely. The extents returned by this method do not need to be tight, but they must not underestimate the size of the volume, or the ray-tracing engine may discard rays that truly do traverse the volume.

For some volumes, the behavior of the field around some surface is of interest, and the surface coincides with element faces. This often occurs at the boundary between the elements and some geometry of interest. For 3D volumes, ElVis supports the collection of element faces into groups called Boundary Surfaces. Boundary surfaces can be rendered using color maps and contours.

This method returns the number of boundary surfaces defined by the model. For this example, we will create a single boundary surface corresponding to all faces along the outside of the volume.

After ElVis determines the number of boundary surfaces available (from DoGetNumberOfBoundarySurfaces above), it uses this method to assign a label to each boundary surface, and obtain the list of face ids associated with the surface.

The OptiX interface can be found in ElVis/Core/ElVisOptiX.cu.  Each of the methods in the interface section must be implemented by the extension in a filed called ExtensionOptiXInterface.cu.

The Cuda interface can be found in ElVis/Core/ElVisCuda.cu.  Each of the methods in the interface section must be implemented by the extension in a filed called ExtensionCudaInterface.cu.