20 years on the cutting edge 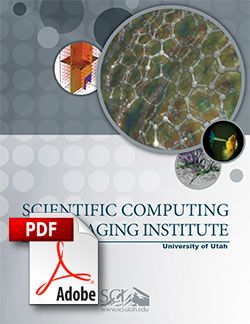 Drs. Chris Johnson and Rob MacLeod, along with their first graduate students, founded the Scientific Computing and Imaging (SCI) research group in 1994. Early growth in 1996 resulted in the SCI research group graduating to the status of a University of Utah (UofU) research center. In 2000, coinciding with a major National Institutes of Health National Centers for Research Resources (NCRR) award, the Center for SCI joined seven other UofU permanent research institutes as the Scientific Computing and Imaging Institute. The SCI Institute is now home to over 200 faculty, students, and staff. The SCI's 17 tenure-track faculty members are drawn primarily from the School of Computing and the Departments of Bioengineering, Mathematics, and Electrical and Computer Engineering, and all faculty members have adjunct appointments in other, largely medical, departments.

The history of the SCI Institute is underpinned by a culture of multidisciplinary, collaborative research. SCI faculty members are recruited with both academic achievements and collaborative histories as the driving characteristics. The SCI Institute culture and its research reputation have enabled the directors to recruit recent faculty members such as Dr. Christopher Butson in 2014 as the director of neuromodulation research and an associate professor in the Departments of Biomedical Engineering and Neurology & Neurosurgery; Dr. Alexander Lex in 2015 as part of the leadership of the Visualization Design Laboratory (VDL); Dr. Akil Narayan in 2015 as part of SCI's scientific computing group and our first faculty member with a primary appointment in mathematics; and, most recently, assistant professor of computing Dr. Bei Wang. In 2017, Dr. Wang joined the SCI Institute visualization group, ranked by CSRankings (http://csrankings.org) as the top visualization group internationally.

Over the past two plus decades, the SCI Institute has established itself as an internationally recognized leader in visualization, scientific computing, and image analysis applied to a broad range of domains. The overarching research objective is to conduct application-driven research in the creation of new scientific computing techniques, tools, and systems. Alongside our research goal is our mission to use our research to educate students and staff. The SCI Institute is proud to have graduated, with an education at the cutting-edge of research, over 400 graduate students and postdoctoral fellows (the Institute has also interned nearly 100 undergraduates). SCI Institute graduates move into faculty positions with universities internationally and also become innovators with companies such as Exxon Mobil, Nvidia, Google, Intel, and Medtronics.

From our early underpinnings, one of the primary application foci of the Institute has continued to be biomedicine; however, SCI Institute researchers also address challenging computational problems in a variety of application domains, including materials, manufacturing, defense, and energy. SCI Institute research interests generally fall into the areas of scientific visualization, scientific computing and numerics, image processing and analysis, and scientific software environments. SCI Institute researchers also apply many of the above computational techniques within their own particular scientific and engineering subspecialties, such as fluid dynamics, biomechanics, electrophysiology, bioelectric fields, parallel computing, inverse problems, and neuroimaging.

A particular hallmark of SCI Institute research is the development of innovative and robust software packages, including the SCIRun scientific problem-solving environment, Seg3D, ImageVis3D, VisTrails, ViSUS, Cleaver, and map3d. All these packages are broadly available to the scientific community under open-source licensing and are supported by web pages, documentation, and user groups.

With a focus on national and international collaborations, the SCI Institute either directs or is associated with several national research centers: the NIH Center for Integrative Biomedical Computing (CIBC); the DoE Scalable Data Management, Analysis, and Visualization (SDAV); and the US Army Collaborative Research Alliance (CRA) for Multiscale Research of Materials (EMRM).