Michelangelo's David; a large-scale seismic volume; the moons of Jupiter; four half-full wine glasses; the Greek Parthenon. What do these models have in common? They were all part of the Star-Ray demonstration at SIGGRAPH 2002, held in San Antonio, July 22-24. With support from SGI, researchers from SCI, GDC, VisSim, and the Graphics group designed, implemented, and premiered interactive ray-tracing of a complex virtual underwater world for thousands of graphics enthusiasts at the world's premier computer graphics conference. 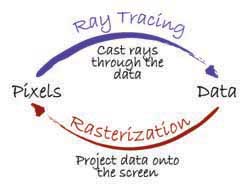 While traditional z-buffer based graphics accelerators operate by "pushing" all of the geometry in a scene "through" the screen, ray-tracing works by "casting" a ray through each pixel of the screen and finding the scene geometry intersected by that ray. Though the final images produced by these two approaches are often identical (though not always: ray-tracers can often produce images with much greater visual richness), the computational complexities are quite different. The traditional graphics pipeline scales linearly with the number of polygons in the scene, and sub-linearly with the number of pixels on the screen. That is, for twice as many polygons, a typical graphics card will take twice as long to render the scene. In contrast, ray-tracing scales sub-linearly with the number of polygons. So for twice as many polygons, ray-tracing will typically require far less than twice as long to produce a complete final rendering. 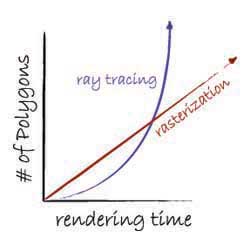 With the increasing power of modern computer architectures, geometric models continue to grow larger every year. In the case of medical datasets, model sizes are typically doubling every two years. In contrast to dataset sizes, our monitor resolutions (the number of pixels on our screens) are doubling at a much slower rate. As shown in the graph above, this discrepancy ultimately translates into a "cross-over point." For large models and complex scenes, ray-tracing becomes a far more efficient rendering approach than traditional graphics rasterization.

We have demonstrated the Star-Ray system to scale near-linearly on a 1024-processor SGI Origin system. The fast shared-memory architectures of the SGI Origins provide an ideal architecture for Star-Ray's image-space parallel algorithm. Pioneered by Dr. Steve Parker, Star-Ray has been intricately designed and implemented to target linear scalability, with elegant load-balancing and ultra-efficient ray-object intersection algorithms at its core.

Designed as a flexible platform for prototyping and evaluating new ray-tracing research, Star-Ray provides an intuitive interface into the system for adding new lighting and shading models, as well as new objects. Because of this flexibility, we easily extended the software to handle the myriad new models that were incorporated into the SIGGRAPH demo.

While Star-Ray has impressive photorealistic benefits, the system would be much less compelling if it were not for its interactivity. The system supports adaptive jittered sampling and frameless rendering in order to provide maximal interactivity without sacrificing image quality.

On a final note, the Star-Ray Team would like to gratefully acknowledge our SGI partners for loaning us the equipment (128 processor Origin 3800) and space (prominent corner booth location) for our SIGGRAPH 2002 Star-Ray demonstration.