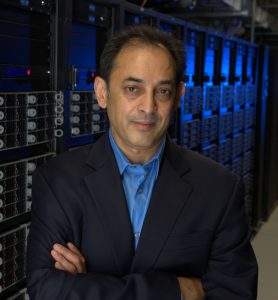 “We are thrilled to have a leader like Professor Parashar take the helm at the Institute,” said Dan Reed, senior vice president for Academic Affairs. “He brings an unparalleled depth and breadth of experience in cyberinfrastructure and computer and computational science that will advance SCI as it continues to innovate, grow, and build research collaborations across the entire University of Utah campus.”

SCI is a campus research center where over 185 faculty, staff, and students work together to shape the future of advanced computing. Since its founding, more than 100 undergraduates and 400 graduate students and postdoctoral fellows have worked on SCI research projects.

Over more than two decades, the SCI Institute has established itself as a recognized leader in visualization, scientific and biomedical computing and image analysis. Computer Science Rankings places the university at No. 2 in visualization work internationally.

“SCI has established itself as a pioneer and an international leader in computational and data-enabled science and engineering research and education—from developing new methods and technologies for data-driven scientific exploration to pioneering new structures for multidisciplinary research,” Parashar said. “ SCI is well poised to take on a leadership role in this scientific revolution.

“I look forward to working with the outstanding faculty, staff and students at SCI to a future of even greater achievements and transformative impact on science and society.”

Parashar is currently on loan to the National Science Foundation (NSF) and office director of its Office of Advanced Cyberinfrastructure, and he leads the NSF’s strategic vision for a National Cyberinfrastructure Ecosystem for 21st Century Science and Engineering. He also is on detail to the Office of Science and Technology Policy (OSTP) and currently serves as assistant director for Strategic Computing. Parashar co-led the committee that developed the National Strategic Computing Update on the future of computing. At OSTP, Parashar is leading the development of the national strategic plan for the Future Advanced Computing Ecosystem. He will continue his role at NSF, spending time each week at the university, until the end of his temporary NSF appointment.