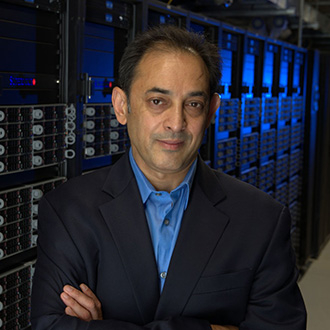 Congratulations to School of Computing professor and Scientific Computing and Imaging (SCI) Institute director, Manish Parashar, who was named one of the Association for Computing Machinery Fellows for 2020 for contributions to high-performance parallel and distributed computing and computational science.

The ACM Fellows program recognizes the top 1% of ACM Members for their outstanding accomplishments in computing and information technology and/or outstanding service to ACM and the larger computing community, according to the organization. Fellows are nominated by their peers.

Parashar is among a group of 2020 Fellows who have provided “wide-ranging and fundamental contributions in areas including artificial intelligence, cloud computing, computer graphics, computational biology, data science, human-computer interaction, software engineering, theoretical computer science, and virtual reality, among other areas.”

“I am delighted and honored to be selected as a 2020 ACM Fellow,” he said. “I share this honor with the many students, post-docs and collaborators that I have had the pleasure to work with over the years.”

Parashar, who was a Distinguished Professor of computer science at Rutgers University before coming to the U, became the new director of the U’s Scientific Computing Imaging Institute on Jan. 1. SCI is a campus research center where over 185 faculty, staff, and students – most from the U’s College of Engineering – work together to shape the future of advanced computing. Since its founding, more than 100 undergraduates and 400 graduate students and postdoctoral fellows have worked on SCI research projects.

Parashar earned a master’s degree and doctorate from Syracuse University, each in computer engineering. In addition to serving as a Distinguished Professor at Rutgers, he is the founding director of the Rutgers Discovery Informatics Institute and served as associate vice president of its Office of Advanced Research Computing. He was also co-director of the Cloud & Autonomic Computing Center and associate director of the Center for Information Assurance.

He is currently on loan to the National Science Foundation (NSF) as director of its Office of Advanced Cyberinfrastructure, and he leads the NSF’s strategic vision for a National Cyberinfrastructure Ecosystem for 21st Century Science and Engineering. He served as assistant director for Strategic Computing at the White House Office of Science and Technology Policy (OSTP) where he led the development of the national strategic plan for the Future Advanced Computing Ecosystem.

Manish is also an IEEE Fellow and a member of the American Association for the Advancement of Science.
Login | Admin
Copyright © 1998 - 2020 Scientific Computing and Imaging Institute
SCI