MRgFUS: A tissue viability imaging biomarker for use in non-invasive breast cancer therapy 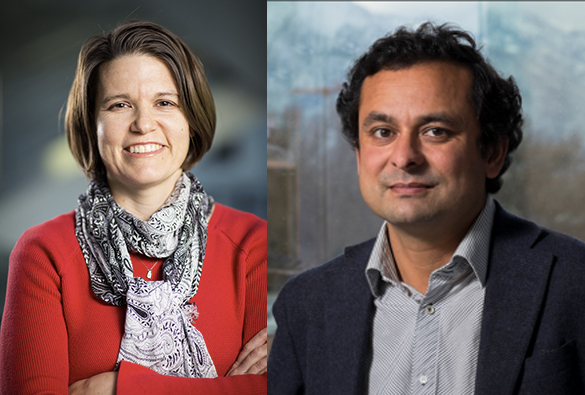 Congratulations to Sarang Joshi and Allison Payne on their five year funding for “A tissue viability imaging biomarker for use in non-invasive breast cancer therapy.” This collaborative project is between the Scientific Computing and Imaging (SCI) Institute and the Utah Center for Advanced Imaging Research (UCAIR).

While improved early detection methods and treatments have reduced breast cancer mortality, a sizable portion of patients remains overdiagnosed and overtreated, warranting the development of more conservative breast cancer treatments. Magnetic resonance guided focused ultrasound (MRgFUS) is one of the most attractive, emerging procedures for breast cancer as it can safely and efficaciously treat localized breast tumors non-invasively.

Focused ultrasound (FUS) has actually been around for a century – the first high frequency ultrasound device called a hydrophone was used in World War I to monitor German U boats. In the 1940s and 50s, brothers William and Francis Fry developed a way to focus this high-frequency ultrasound and burn brain tissue. But scientists couldn’t accurately see the exact location of where their focused ultrasound was being applied. So while the therapeutic potential was great, it wasn’t until the 1990s that FUS was combined with MRI technology and MRgFUS was born.

The first FDA-approved medical device using MRgFUS came in 2004, used to treat uterine fibroids. This non-invasive technology shows particular promise in treating brain disorders and disease because brain tissue is difficult to access and it is easily damaged with other treatments. In fact, MRgFUS has recently been FDA approved for essential tremor, and In fall 2017, UCAIR will have one of the first brain MRgFUS devices used for this treatment.

Payne and her mentor, Dennis Parker, PhD, realized in 2008 that focused ultrasound could offer women a completely non-invasive treatment for breast tumors with no scarring or other side effects. Nine years later, she is the first researcher in the world to develop a fully functional system customized for breast tumor ablation.

Currently, clinical MRgFUS ablation treatments are assessed with MRI metrics that primarily quantify thermal and vascular effects. While there is evident MR sensitivity for tissue changes induced by MRgFUS thermal ablation, no single metric or combination of metrics have demonstrated adequate accuracy in predicting tissue viability during or immediately post-MRgFUS ablation treatment. In addition, the use of gadolinium contrast agent-based assessment techniques precludes further ablation treatment if positive tumor margins are suspected. This work proposes to address this critical unmet need through developing a deep neural network non-contrast imaging biomarker that would provide an immediate and accurate assessment of tissue viability and could be applied repeatedly for an iterative assessment of tissue viability during the MRgFUS ablation procedure, assuring complete non-invasive tumor treatment. This objective will be accomplished with three specific aims.